Embracing rough and tumble play? Isn’t that the type of play I try to stop from happening in my classroom?

I spent years gently reminding children that we don’t play that way inside. Wait until we get outside. Even when we were outside, I would constantly interrupt, “Be careful. You might get hurt.”

Rough and tumble play is the purest form of what it means to be a child. It is the two year old jumping up and down, waving their arms a up and down yelling, “Mommy! Mommy!” at the end of a school day. It is the four year old spinning and falling, and then spinning again. It is the time when children are so engrossed in the joys of movement that they lose all track of time.

As we grow into adulthood, we see this same total immersion of the mind and body when a dancer executes a phrase with extreme focus and precision, or when a surgeon completes a complex procedure and saves a life. Sometimes this immersion in movement is as simple as tending to a garden, or rocking a child to sleep. With adults we call this flow, but with children it’s called childhood.

I embrace rough and tumble play because it is literally a type of embrace. It is a way for children to show affection for another while also testing the limits of their own physical abilities. Children need tender affection such as cuddling and hugs, but children also need to be physical in a more vigorous way.

So yes, I embrace rough and tumble play. I love the joy it brings when my class engages in it: roughhousing on the mat together, spinning endlessly, stomping, making themselves bigger and more powerful . I also embrace that peaceful calm they have when they (eventually) get tired and focus on a quieter activity such as building with Legos or Mobilos.

I can’t tell you how many times I have had an adult come into my classroom and ask how I get preschoolers to sit so quiet and focused. If they had come into my classroom ten minutes earlier, they would have seen children roughhousing and laughing riotously. People also comment on how well the children get along in my classroom. Again, this happens because we play loudly and physically, not despite it.

The more I teach, the more I have come to believe that children move from parallel play to collaborative play first through physical play, literally having their bodies interact with others. It doesn’t necessarily need to be rough and tumble play. It could be dancing although I find it hard to tell the difference with preschoolers. 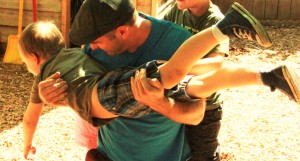 I embrace rough and tumble play because I think it brings out the best in children.