“When I got home from school, I would run with my dog spot to the pond past the pine trees.  That was a long way back, probably a quarter mile.  Then we would run back to the road.  We would run back and forth until I had to go in for dinner.”

My dad doesn’t talk much about his childhood.  I didn’t even know he had a dog, but I could tell he was picturing the scene in his head as he told me about the freedom he felt as a child as he ran endlessly.  It’s harder for him to get around now.  His legs don’t always take him where he wants to go.  But he still has his memories.  He can smell the pines.  He can feel the breeze.  He is no longer on the other end of the line as I talk to him on the phone.  He is back at his childhood home, and I picture it as if it were a vague memory of my own. 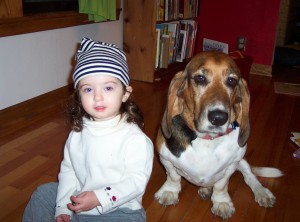 This made me think about some of my assumptions as a preschool teacher.  In early childhood education, we often think of children in terms of “development.”  Child development can be important, but we must remember it is one lens to look at children.  When we look at children in this way, we are always looking at where the child will go next.  Emily Plank, author of discovering the Culture of Childhood, told me that we think of children as Human Becomings rather than Human Beings (although I think she was quoting someone else).

Talking to my father, I see it is just as important to look at childhood from the other side, to look back and see what we have been.  That boy running with his dog is still a part of who my dad, but it is not something he could do now.  That boy running was also once an infant taking his first steps.  The developmental view is no more important than the reflective view.  I could talk about how that child running is not just developing his muscles, but releasing BDNF to spur neuron growth, while also regulating his attention so that he could focus on academic skills.  But that is really beside the point.  It seems to me that where we might be next in our development is comparatively unimportant.

How we feel at any given moment is what we carry with us.