I was having a conversation with Nancy Boler, a yoga instructor. I came into the conversation wanting to talk about ways to help kids relax or calm down, especially as they settle in for nap. I was telling Nancy about my desire to have a balance

to the roughhousing and other Big Body Play I am encouraging in my classroom. I made reference to wanting kids to be able to move from their excited state to a calm state. 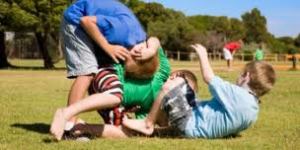 Nancy challenged me on the use of the word “excited” to describe roughhousing. She said, “It’s high activity, but not excited. It’s very focused. The kids are very aware of their body when they roughhouse.” She contrasted this type of play with playing video games where there is also a spike in adrenaline and an increase in the heart rate. However, the body itself is at rest. In this case there is a disconnection between the body’s actions and the body’s reaction.

In my head, I had been thinking of roughhousing and yoga as opposite sides of a balance with the body as the fulcrum. But 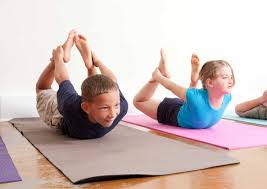 this conversation made me want to focus on the similarities. I thought of my limited understanding of the yin-yang. Roughhousing is high activity and (some) yoga positions are low activity, but both revolve around an awareness of the body. 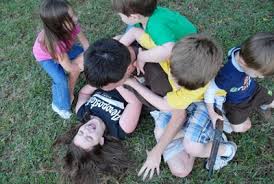 This brings up another point that Nancy made. “I don’t think adults give children enough credit for self-regulation.”  If children exert themselves physically, they will eventually find a time to rest. Some kids will go from one extreme to the other. I have a niece who when she was three, would ride her tricycle up and down the sidewalk until she literally fell asleep. She had to be carried up to bed. Most kids, of course, have a transition between the two extremes.

I think we get into difficulty when children watch a movie or play a video game that gets them excited. I think most of these children will need to engage in some high activity get their mind focused on their body again. They could also do it by being very intentional with breathing exercises. Either way, I think it helps to think of it as balancing excitement with body awareness rather than excited and calm. 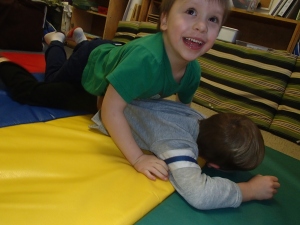 Thinking about it this way helps me figure out how to interact with children who are playing actively soon before nap time in my classroom. A child who is playing pillow fight with others and laughing is already showing body awareness so it will be a matter of gradually lessening the activity. However, a child that is throwing pillows randomly and shouting seems to be in an excited state and in need of focus. If I throw a pillow at this child, I am offering myself as a target and focus for the play. I may need more physical contact (hugs, sitting on lap) as we move into quieting down for nap.

This idea of roughhousing as body awareness also gives me deeper appreciation for what the children are doing when they are playing rough. There have been studies showing that “play fighting” and “rough-and-tumble” play leads to social competence and group cohesion. I think this self-awareness that kids develop (in conjunction with impulse control that happens concurrently) is a big part of this social

I wrote this post last week while I was at the High Scope International Conference. I did a workshop on gunplay (and warplay and super hero play). I also was able to be a part of several great workshops. One workshop that really touched me was called Make Room for Boys by Gerin Martin and Sandy Slack based on their book of the same name. The book and workshop has tips for teachers on how to work with boys based on what we know about the development of boys. 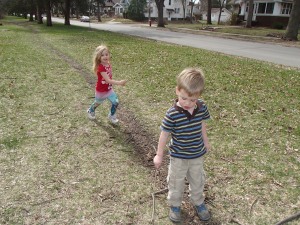 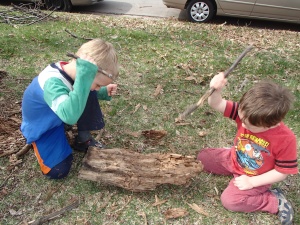 During my workshop on gunplay, a participant talked about how boys express some scary things. I asked the question, “Is itOK for them to express anger?” I could have asked, “Is it OK for them to express fear?” Many participants at my workshop seemed uncomfortable with boys pretending to use guns or weapons. The person mentioned above, and I am sure others, worried about boys expressing violent fantasies.

What I find interesting is this reluctance of teachers to allow boys (and some girls) to express their fantasies because it is too “scary.” The fear isn’t about children engaging in actual violence, but pretending to engage in violence. Children often engage in this type of play to gain a sense of power, especially over fears that they have. In other words, this type of play is a way to express a sense of fear and power (and at times anger) without actually being physically aggressive. 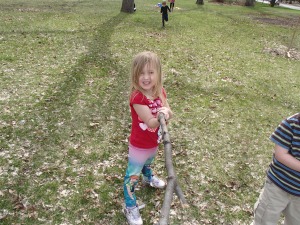 In fact when children engage in gunplay or superhero play, they show a great deal of impulse control by staying in the role they take on. The child in their role may shoot or otherwise attack “a bad guy,” but they stay in character and follow the rules of that character. For example Superman flies, but doesn’t use a gun. A police officer uses a gun, but doesn’t fly. We should be encouraging children to express their fears (and other emotions) in such a controlled and measured way, not trying to stop it.

If we want boys to learn that it is okay to feel scared, frustrated, giddy, embarrassed, worried, overwhelmed and understand that everyone feels that way at times, we need to encourage them to express themselves through play (and in conversation). If they are not hurting anyone, they should be able to choose what they pretend even if an adult finds it scary.

As Fred Rogers said, “Anything that’s human is mentionable, and anything that is mentionable can be more manageable. When we can talk about our feelings, they become less overwhelming, less upsetting, and less scary. The people we trust with that important talk can help us know that we are not alone.”

Adults often find children’s concept of time amusing. A child will use the word “yesterday” to mean anything that happened in the past. It isn’t that children don’t have a concept of time, it is simply that their conception is not fine tuned. “Yesterday” does refer to the past. Young children simply generalize the meaning of “yesterday” to mean everything in the past. They will eventually differentiate the past into more segments of time (last week, before you were born, last Spring, etc.).

The other way children use “time words” is to refer to how strong an emotion is. When a child is angry and says, “You’re never going to be my friend,” they aren’t referring to how long their anger will last. They are talking about the extent of their anger. An adult can tell them that they will be friends with the other child in a few minutes, but that doesn’t mean anything to the child. They are experiencing their present state without regard to the near future.

Young children look at the world like a slide show rather than a movie, one thing at a time (a metaphor introduced by Diane Levin). They can understand a sequence of events, but they don’t necessarily look at one event leading to another.

This slide show approach to life can be hard for an adult watching a child who is sad or angry. It can also be wonderful when the child is happy. This sense of the here-and-now is why a child can forget about the walk to the park when she finds a butterfly. Suddenly, the whole world is just a butterfly and the breeze bending a flower as it sips the nectar. The world becomes magical shifting from one experience to another.

When a child is upset, adults often have the best intentions when they tell them they won’t be experiencing this moment soon. What is more effective is to acknowledge the emotion. “I’m sorry you are sad. You don’t like to get your shirt wet. I will help you.”

No matter the exact words, the adult is saying, “I am here with you now.” And really, that is all that matters.