My class just finished an investigation of a car, specifically a 2003 Buick Le Sabre Custom owned by one of my co-workers. It may sound funny to be so specific about what we were investigating, but it’s a very important part of the experience.

Our investigations are in-depth studies of something the preschoolers in my classroom are interested in. Each investigation lasts about 6 weeks. We usually only spend about 10 minutes a day on the topic. But the children start applying their new knowledge throughout the day. Sometimes they incorporate this knowledge into their pretend play. Sometimes they notice things in their daily life that they usually don’t notice.

The investigation can go deeper if I focus on something specific. 10 years ago I did a “car investigation.” As I look back on my documentation, the kids focused on the various colors cars came in. They categorized cars into minivans and cars. They also focused on the steering wheel and radio.

The Le Sabre investigation involved looking at the whole car, inside and out. Early on we did observational drawings

where the kids drew details from the car. We checked and added oil. We added wiper fluid, and tested the wipers. We tested the lights and changed a bulb on the turn signal. We jacked up the car and took off a wheel.

We did another observational drawing at the end. One of the interesting changes that happened involved the dashboard. The first drawings had lots of circles for buttons scattered across a rectangle. The second drawing had a distinct radio, vents, controls for the air and the turn signal (with the control for the wipers). The children clearly had a broader knowledge of the car.

At the end of the investigation we made a Le Sabre out of cardboard. It was interesting to see the details that they chose to represent. We had the four wheels, but now the kids drew the hubcaps on the circles. They cut out yellow paper for headlights and red paper for the tail lights, and orange for the turn lights. Someone made a radio with buttons and lines (for the CD player). One child put a small box under the hood for the engine. The next day, another child drew squiggles on paper and then copied “10W 30” from the photos of us adding oil. She taped the drawing of “oil” on top of the engine.

My hope is that each investigation makes children take a closer look at something around them, something they see every day. During the investigation they look closer. They focus their attention, first on the subject of the investigation (the Le Sabre in this case), but then their attention focuses on their environment. They start noticing the control for the windshield wipers in their own car, for example. It starts with looking closely at one thing, but it allows them to see the whole world differently. 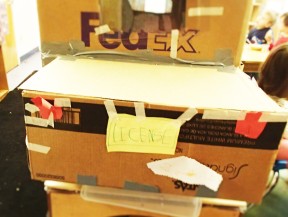