Looking back on the preschoolers who graduated, it’s clear that each child is ready to take on Kindergarten head on.  They will continue their journey through school and life beyond the classroom.  Each one is ready for school, and I hope the schools are ready for them.  I don’t doubt the dedication of their new teachers or new schools.  My fear is that many schools offer too few paths for children to take on their learning journey.

I look back at some of the leaps in knowledge the children took, and I can see how different the journey through my classroom was for each child.  Jack was obsessed with the Mario Brothers game.  Every day he would pretend to be Mario and his best friend, Trevor was always Luigi.  Jack and Trevor spent most of the time running around acting out the game.  The rest of the time Jack and Trevor were building Transformers with Mobilos. 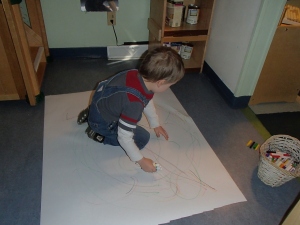 One day Jack sat down with paper and markers and drew a picture.  He asked me to spell “Mario.”  Then he drew another picture and asked how to spell “Luigi.”  Soon he had me spelling Wario, Waluigi, Toad and Princess Peach.  Jack hadn’t really shown much of an interest in writing before, but after a few days he was spelling Mario by himself.

His friend Trevor had been writing for a few months.  Trevor would usually make a card for his mom after lunch.  He would write “mom,” “love,” and his own name.  He would also copy words from a “word book” (a book with pictures and captions showing how to spell the word).  He usually copied the names of foods he liked to eat.  One day he brought over a sheet of paper he had worked on.  He told me it was a new guideline for our classroom.  He had spelled the words himself.  It simply said, “Don’t bring a dog, bring a kid.”  He had drawn a dog with a circle and line through it.  Next to that was a grown up and child holding hands.

Yusef was interested in bringing the whole class over to his house.  He told me he knew the way to his house, and 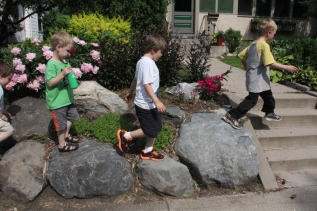 asked if he could take us over in the afternoon.   He drew a map.  He started to label the map.  He drew an H for hospital.  He asked me to spell basilica for him.  I knew that he lived in the suburbs at least 10 miles away, but I was interested in how far he could get us.  He led the class for a few blocks and then he had to stop.  He told me, “Let me look at the streets and let me look at my imagination.”  He thought for a minute or two and then directed us for a few more blocks, all the way to the freeway entrance.  It was farther than I expected.  He really was able visualize a map in his head.  I had to point out the sign that forbid pedestrians.  A few weeks later, he and his mom did invite the entire class over to the house on a Saturday.

Meanwhile Galadriel loved playing with her stuffed animals.  She often made cakes out of play dough for her animals.  She would put candles on the cake.  Sometimes, there was only one candle because the animal was her baby.  Other times there would be ten or more.  She would make birthday cards, copying words.  The parties usually involved two or three other children and their stuffed animals.

Jack, Trevor, Yusef and Galadriel all had their own experiences that fostered their learning.  I focused on some academic skills, but I could have focused on social skills or creativity as well.  I also could have talked about other children from the class.  They each had their own distinct path, but somehow all our individual paths would cross over, merge for a bit and then wander away again.

I am thankful that I was able to accompany each of the children on their paths for this short time.  I can’t wait to see where life takes them.  And I look forward to a new crop of kids to send me in new directions.