I watched the movie Batkid: The Wish Heard Around the World last night.  It’s the story of Miles Scott, a young child with leukemia.  When Miles was five, he made a wish with the Make-A-Wish Foundation that he wanted to be the real Batman.  The wish granters found a stuntman to play Batman and Miles would be Batkid.  They decided to have a flash mob at one point during the wish so they tried to get 200 volunteers.  Instead over 10,000 people showed up.  Meanwhile people from all over the world starting sending messages of encouragement, as many as 1,400 messages per second.  Entire sections of San Francisco were shut down and turned into Gotham City.  The story is incredible and I can’t recommend the movie enough (or volunteering for Make-A-Wish).

Make-A-Wish grants hundreds of wishes around the country, but most wishes do not get outside attention.  There was something different about this one.  I think it says a lot about the importance of superheroes.  While there is no such thing as a superhero in the comic book sense, the concept of superheroes seems to connect with something deep inside many of us.

Both the Chief of police and the mayor of San Francisco (both starring players in the wish) talk about Batman as a hero that inspired them when they were growing up.  The costume designer from the San Francisco Opera who made the batman costume also was a fan of Batman.  Many of the people who sent emails, Facebook messages or showed up in person were dressed in Superhero outfits.  It clearly strikes a nerve in many of us.  Reading or watching movies about superheroes can give us a sense of bravery we may not always feel.  On top of that, most superheroes are also outsiders in some way, not fitting in with the rest of society.  I think most people can feel like an outsider in one way or another.

The pivotal point in the documentary for me was 40 minutes into the movie when the day of the Wish started.  Up to this point you see Miles playing and smiling like most preschoolers.  But then there is a change.   Batman comes to the hotel room.  He hands Miles a Batkid costume and says, “I need your help.  I need you to put this on.”  Miles walks out of the bedroom in costume and he is standing up straighter with his chest out and his arms splayed out just a bit.  He is essentially taking a power stance.  There is no smile.  Instead he has a very serious look on his face.  He uses a deeper voice. 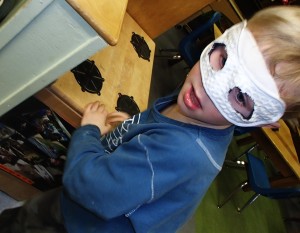 Miles is clearly feeling powerful.  He goes through the day helping save someone from the cable car tracks, capturing the Riddler and the Joker.  Meanwhile there are over 10,000 people cheering for him.  Miles and Batman stop for lunch and Miles looks out over the crowd who starts dancing.  He uses his kid-voice now.  He says, “I think I’m done.”  He seems tired.  Suddenly they see The Penguin (the comic-book villain) kidnapping the San Francisco baseball mascot, Lou Seal.  Miles kicks into his Batkid persona and he and Batman head back out.

Eric Johnston, the man who played Batman, commented about this moment in this way, “He battled leukemia, 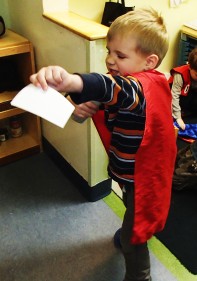 and when you’re tired you can’t stop.”  Miles puts his mask back on and takes on his power stance, and he’s back in action.  Clearly the superhero persona is helping Miles work through this challenge.

The father also talks about how Miles identified strongly with Batman because he fights bad guys the same way Miles fights cancer.  He has no super powers, he simply doesn’t turn away in the face of fear.

I think it’s just as clear that many other people also identify with that same feeling.  Many of us want to be as fearless as Batman.  They need that same reminder to be strong and powerful. 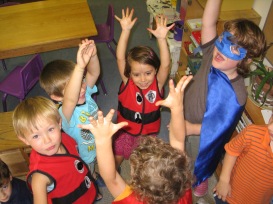 Parents and teachers often complain about kids playing superheroes.  They say the play is violent and out of control.  I often hear teachers say the play serves no purpose.  I think Miles shows that superheroes serve a very real purpose.  Not all of us have to face a battle with cancer, but we all have struggles in life.  When that happens, it is important to find your inner-superhero, take a power stance and move forward.