This summer, I took a break from writing this blog while I finished the first draft of my book, Teaching with the Body in Mind. The book covers a lot of the same topics as the blog. I now will get back to posting weekly. 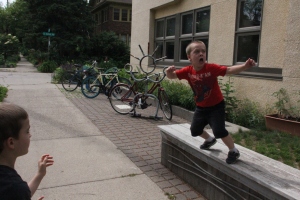 While I was working on the book, I read several studies. One thing that really struck me was how small the sample sizes were for each study. One of my favorite researchers is Michelle Tannock who does a lot of work on rough-and-tumble play and attitudes about it. One study of Tannock’s that I often cite found that close to 80% of incidents of rough-and-tumble play was done by boys in this particular setting. Reading the study again, it really struck me that she studied a class with 17 students.

When I think of my classroom, and how much it varies from year-to-year, I can’t help thinking how different the results would be. Last year there was a lot more rough-and-tumble play than this year. Last year, the girls were responsible for much of that play. My gut feeling is that the boys still did the majority of the play, but it really can vary. 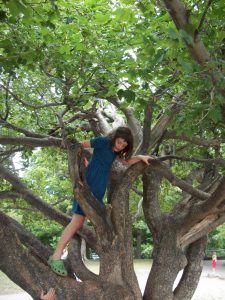 Most studies on rough-and-tumble play find that the boys engage in more of the play, and a few boys are responsible for most of the play and particularly the more forceful play such as pushing, tackling, etc. The problem is that many in the Early Childhood Education field (sometimes even the researchers themselves) talk about what boys tend to do and what girls tend to do. When referring to boys, the conversation often slips into the few, most physical boys. In most research, the most physical boys are outliers on one side along with a few boys who engage in very little rough-and-tumble play.

After all, I could describe how boys behave by talking about Stan. He spends most of his time outside playing a marimba or drumming on buckets. He will spend a few minutes “fighting” the teacher with a pool noodle. He does not attack other children, just the teacher. Inside he will play on the mat, but rather than pushing and grabbing others, he usually plays “pile on.” One child goes on the bottom and three or four others pile on top. They just lie there on top of each other until then bottom person asks everyone to get up. Stan describes the way boys play about as accurately as well as using Greg as the model. 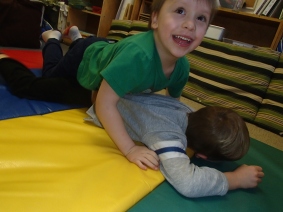 Greg likes to tackle others (who he is playing with). In the classroom, he often runs and dives onto the floor. He is almost always playing physically and he can rarely sit still. The truth is, most boys aren’t like Stan or Greg. They are somewhere in between. So are most of the girls in my room.

Statistically, the boys in my room probably play rougher. Statistics can be helpful. As I’ve written in the past, knowing the statistics of the expulsion rates of boys vs. girls points to a need for systemic change in early childhood education. Especially when you consider boys tend to play rougher.

However, in the classroom, the statistics don’t mean much. When I watch Bart playing in my classroom, it doesn’t matter if he’s more likely play rough. I won’t learn about Bart by looking up statistics. I need to watch him. I don’t teach children. I don’t teach boys and girls. I teach Bart, Francine, Greg, Tina, Stan, and all the others who have names and personalities. I need to figure out how to be effective with each child and it will be different for each child.

I don’t call a birch tree a pine just because it is growing in a pine forest. Teachers have to see each tree. Researchers look at the forest.